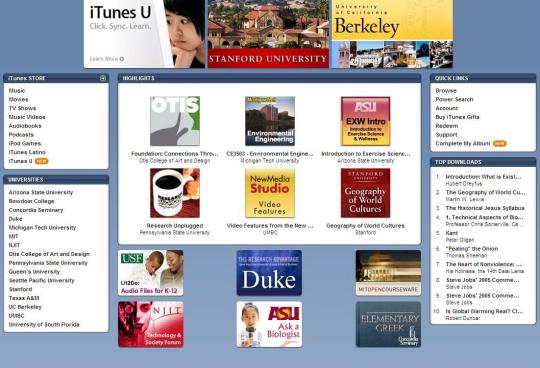 
That includes iTunes Plus, which will allows you to purchase high-quality (256kpbs AAC format) music for $1.29 that DRM-free. Customers can still choose to purchase 99 cent versions of these songs that have digital rights management (DRM) that limits their usage. This initial DRM-free offering is from the EMI catalog and includes their music videos at no additional cost.

But what interests me from my NJIT perspective is that iTunes U is now a link within the main iTunes store, and NJIT is one of the "sweet 16" universities featured in the index. There are rumored to be more than 200 schools associated with iTunes U, though my own links list of public iTunes U schools that I have found is much smaller.


We're in good company. Though most news articles still mention the original schools (Stanford University, UC Berkeley, Duke University), Apple has wisely chosen to feature a variety of schools geographically & by size. So, you have MIT and Concordia Seminary, Penn State and Otis College of Art & Design.


There's a top 10 downloads list (though after one day it doesn't mean much, the existentialists are in the lead).

Our own Tech & Society Forum series is currently a featured podcast program. One of my favorites of that group is Freeman Dyson's talk on "Life After Darwin: The Open Software of Gene Transfer."


Freeman Dyson is such an interesting person to hear. He's a physicist and mathematician, famous for not only his his work in quantum mechanics, solid-state physics, but also his theorizing in futurism and science fiction concepts, including the search for extraterrestrial intelligence. He's Professor Emeritus at the Institute for Advanced Studies in Princeton (Yes, that's the place where Einstein spent his NJ days).


Included in the sixteen Forum podcasts is Cynthia Breazeal from MIT talking at NJIT about "Creating Sociable Robots", Michael Oppenheimer on global warming and a talk by NJIT's own Phil Goode who is the director of the Big Bear Solar Observatory (BBSO) located in California which is operated by the New Jersey Institute of Technology.

NJIT on iTunes U is used to deliver over 30 courses to students. Currently, eight of those are offered free to the public in our Open Courseware area.


Unlike some universities who have professors wearing microphones in class and recording lectures to offer students, we chose for pedagogical reasons not to pursue that course. The majority of our course offerings are polished, edited talks running much less than a standard lecture period. We didn't want the podcasts to be an "alternative" to class attendance, but rather a tool to extend the classroom.


An excellent example of this is Dr. Norbert Elliot of our Humanities department who has 4 courses offered in our public area. He uses the podcasts for face-to-face classes as preparation prior to the class session, and now begins the class at the point where the most discussion and active learning occurs.


Dr. Elliot was one of our earliest podcasters. We began in 2005, a full year before we even applied to be an iTunes U school, creating mp3's, testing video formats and distributing them from our own site starting with the spring 2006 semester. He was already creating screencasts (using Camtasia) and PowerPoint presentations with audio narration, so he made a smooth slide along the learning curve to podcasting. After some instruction, he produced his own podcasts (some audio mp3's, some video, some "enhanced podcasts" - slides with narration). Having our faculty act as content creators was the model we are most interested in encouraging.


Back then, though we were all impressed by the big podcasting projects such as Purdue's Boilercast, we knew that NJIT could not support with our limited staff any effort to podcast every lecture from every course, and, more importantly, we wouldn't want to even if we could. (I notice that Boilercast has also gone into iTunes U.)


I gave a presentation at an Apple podcasting session at Rutgers College in 2006 and an instructor in the audience asked me, "Why should a student come to my class if the lectures are all online?" My answer was to ask that if, in fact, students could get everything from the lecture in a podcast of it, why should anyone come to class? That wasn't the answer he wanted to hear.


My contention is that if your class is just a lecture with no interaction, no active learning, no added value to being there, then you are doing distance learning - but unfortunately, the distance is only from the front to the back of the room.


There is still some value to archiving lectures start to finish and offering them. It's great for a student who missed class, good for students to review for exams etc. But I cringe when I listen to some of these. I clicked on UC Berkeley's CS 61A, a course in computer science, and after 2 and a half minutes of listening in to a conversation about trying to get the lecture hall projector working correctly, I clicked off.


And I know from experience that IT staffers and faculty cannot be recording and editing all these podcasts. One of our instructors, after his initial semester recording his lectures start to finish, realized that the "shelf life" of them was going to be short. The 90 minutes included Q&A (some unintelligible) and discussion about homeworks, grading policy, exam schedules etc. The next semester he chose to record only the first 20 minutes of his class where he had prepared a concise mini-lecture. After that, mic off, he went into discussion, activities etc. Those mini-lectures are now, following the Elliot model, something students download before a class meeting, adding 20 minutes to his in-class discussion time. Not only did he change his recording method, he changed his approach to teaching.


Finally, I can't ignore the marketing aspect of iTunes U for NJIT. I have seen the number of iTunes users run all the way from Apple's conservative estimate of 10 million to the market research firm Current Analysis saying 200 million users. In any case, that's at least a few million new eyeballs that will see the NJIT name, branding and our content.


Our admissions office was amazed after doing their first 5 minute podcast last fall and having it available for only a week before an open house that students attending said they had downloaded it.


Podcasting, like many Web 2.0 applications, is not something that departments such as admissions, communications, public relations, athletics, alumni and advancement take to easily. They have grown as a print, press release, and mailings operation and the transition is tough.


I'm very curious to see how our download statistics change in the next few weeks given the wider exposure of our iTunes U offerings. (I hope to post about that in June.)


Let's try a social networking experiment - Why not click on that Freeman Dyson lecture right now and let's see if we can't send him right to the top of the most downloaded list!

Downloading NOTE: some podcasts are huge files - our Tech & Society Forum series files are video at about 300mb a shot, so if you don't want a big download, you can just doubleclick a title in the iTunes window and it will stream & play without actually downloading the file to your computer. Of course, if you want to transfer a program to your portable player or put it on a CD, you will need to download the file.

"I do not fear computers. I fear the lack of them."
Isaac Asimov