Anyone who has read my posts about spam knows that I am the spam executioner.  I admit that I am an anti-spam fanatic and my spam controls on this server are Draconian even by Draco's standards.

There are many misconfigured e-mail servers out in the wild that blithely relay spam email to its targeted destination.  The most notorious of these mail relays that daily task me is one of the e-mail relays at yahoo.com.  Another wildly inconsistent e-mail relay is one of the AOL e-mail servers -- my efforts to bring Yahoo and AOL into the legitimate e-mail fold have met with indeterminate success.  Sometimes their e-mail relays behave and deliver real e-mail and sometimes they go round the bend and spit out scads of spam.

I'm committed to overcoming the automatic rejection of reader's comments by the spam filters and, if you have a comment rejected because of a spam block on the s35 server, please send an e-mail to s35@serendipity35.net and I will remove your e-mail address from the automatic spam filters.

The posts that Ken and I write are not one-way valves.  We both value (if not crave) your feedback.

If you have something to say, please say it; if the anti-spam gods object to your post, send along your e-mail address and I'll make sure the gods are appeased.

Many months ago, Brother Tim, Serendipity35 IT guy and very occasional blogger here, started this post. It has been staring at me in the drafts queue and today I decided to dust it off a bit and send it out into the cloud.

So, there I was at Miller Air Park fueling the Piper Archer airplane I had rented for a flight down to Cape May County airport.  It was a busy morning for the airport and several planes were in  pre-flight, being taxied to the northeast end of the runway, or were already cocked into the wind, holding-short of runway 24 doing their pre-takeoff run-up.  Each pilot in turn completed the safety checklist, pivoted onto the runway, firewalled the throttle and lifted the aircraft into the smooth gray sky.

In the 30 minutes or so that I had spent pre-flighting and fueling my own plane there were 7 departures but, except for a pre-solo student and instructor locked into the never ending left turns of take-off and landing pattern practice, no other aircraft arrived at MJX.

Ken and I are sometimes like the FBO staff at Miller Air Park.  We send post after post off into the Internet clouds and, every once in a while, we receive an arrival. A returned comment here and there lets us know that the posts we roll off our Internet tarmac aren't falling off the edge of our flat earth.
Ken builds almost all of the wordcraft we launch and I spend most of my time clearing turkey buzzards and deer off our virtual runway, but once in a while, I get to fly a post of my own. And on that Saturday morning in Whiting, NJ, I held the nose on the centerline and rotated that Piper into the air.

I climbed to 400 ft and turned left toward the coastline. Over my shoulder, as I

approached 1000 ft, I could see the massive airship hangars of Lakehurst Naval Air Station and the abandoned, but standing, stall of the Hindenburg, unoccupied since May of 1937 when the dirigible burned at her mooring.  When it departed Frankfurt, Germany on May 3rd that year, the crew that launched her expected a return, too. Though it was scheduled to fly back from North America to Europe with a full manifest of transatlantic passengers en route to the coronation of King George VI of England, its final destination remained in New Jersey.
Fifty years after the famous crash, long after it was branded a mystery and pursued only by academic enterprise, the actual cause of the craft's incineration was discovered. The paint that protected its outer skin from the harsh ocean crossing, burned like a magnesium fuse when lit by lightning over land. 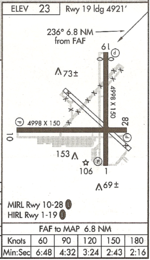 I quickly flew through Atlantic City's airspace and continued inbound to the Sea Isle City VOR. My checkpoints, spaced on my chart at 10 minute intervals, rolled underneath my right wing at 8, then 7, minutes.  I was ahead of schedule and soon I'd arrive at WWD 10 minutes before my flight plan had estimated.
Traffic was light at Cape May County. I radioed the airport's CTAF for the active runway and entered the downwind pattern for 28.  There were no other aircraft in the pattern (or rolling on the ground) and I touched down just past the threshold markers and turned off at the first taxi-way. Not stopping to visit, I headed back to the east end of runway 28, throttled back up and, five minutes after I had first touched down, was airborne again and heading home.
I flew back to Miller through the same airspace that the Hindenburg traveled on its last day.  I landed, safely, just a few miles from where the dirigible fell to the ground.  It had only taken a couple of hours but I returned to the airport from which I'd departed -- a luxury the Hindenburg pilot never had.
Maybe fifty years from now, like the paint on an unburned scrap of the Hindenburg, some word, sentence or phrase from Serendipity35 (or some other Internet archived version of it *) will drop out of the clouds and reveal some small unintended truth about the technology and learning lives we live today.

Although the Wayback machine at archive.org only began to archive Serendipity35 pages back in 2009, at least there is some other record of our time here on the Net.

I finished the transition of Serendipity35 from an "all iron" computer server machine to a virtual entity in the internet cloud.  Its almost as if I took its computer soul and installed it in the heavens.