Serendipity35 crossed over the 14 year anniversary on February 2 this year as people were predicting the American football Supr Bowl and predicting the remaining weeks of winter based on a groundhog or the traditions of Candlemas. Usually, I look back on the previous year on this blog's anniversary, but this year I decided to look ahead.

Looking ahead and making predictions is a December and January tradition. I feel like most of the time those predictions don't come true, but we often don't look back to check them. In education and especially in technology, it's hard to predict what is coming in the year ahead. That is why I had to look at an article I saw that was titled "Five Predictions About U.S. Higher Education In 2040."

2040? It's hard enough to see ahead to the end of 2020. So the author of that piece, Sally Blount, is either crazy, has Nostradamus DNA, realizes that no one is going to check back on her predictions in 20 years, or she has analyzed real data.

She is a contributor to Forbes, former dean of New York University’s Stern Undergraduate College of Business and seems to specialize now in careers. She analyzed the data and marketplace of the U.S. post-secondary education along with Larry Shulman, senior partner emeritus at the Boston Consulting Group and they came up with 5 "not-so-crazy predictions" about how the U.S. market for four-year bachelor’s degrees will likely look in 20 years.

One prediction is that half of those college degrees will be awarded to students who have spent three years or less on a college campus. How will that happen? More courses per semester? Trimester years rather than bimester years? No. It's based on the number of college-level courses (Advanced Placement), tests and enrollments in college-level online courses that have been expanding "outside credits" by about 5-10% per year over the last decade.

Their second prediction plays off #1. With three-year bachelor’s degrees becoming more of the new normal, private colleges and universities offering 4-year degrees will close. Less time on campus means fewer tuition dollars. Add slowing enrollment growth and more pressure to hold down tuition costs and they calculate a 30-40% contraction among private non-profits over the next 20 years. If you consider that as many as 20 private colleges closed in the past year and that trend just stays flat, for the next 20 years, that's about 500 schools disappearing.

And the third prediction follows those two by saying that the for-profit market for college education will account for 20% or more of college credits (not degrees) each year. That ties into prediction #1 about outside credits. We thought back in 2012 that MOOCs would make this happen. They peaked, leveled off, dropped some and are now coming back in a less "open" and free fashion. Some of the alternatives the article offers are quality virtual education in key content areas (for example, core courses in the social sciences), and others offering very specialized experiential learning programs (gap years; semesters abroad) with the focus on credits, not degrees.

Blount points to these firms (not colleges) as not needing the same infrastructure and other overhead typical of traditional higher education. This is not news colleges want to hear, but it is news they need to consider.

Blount points to NCES data, saying that for-profit degree providers currently register about one million students (7% of U.S. enrollments) each year. Despite a downturn among for-profit educators after a growth spurt from 1995-2010, private equity firms have been acquiring both struggling providers and long-time providers like DeVry University and the University of Phoenix and will take advantage of the market opportunity in offering credits.

Another prediction is that the gap between elites and non-elites in the college marketplace will only grow wider. Though high-demand schools won’t face the same pressure to accept outside credits, the boards and faculty at many of these schools will explicitly move to a three-year campus residency standard to create more slots for students.

Jeff Selingo is saying that something to watch this year concerning continuous learning/universal learning/60-year curriculum/lifelong learning (I'm not sure what the term du jour is) is not coming from universities but from Amazon.

This idea that we are always learning is hardly a new idea. But the idea that schools (at all levels) should supply that learning to non-traditional students who have left the school or maybe never attended the school is fairly new. Distance-learning began in the U.S. in the late 1800s. "Distance" meant that the learning was not in a classroom.

It went from the correspondence-course model to the broadcast airwaves to the combination of snail-mailed CDs and DVDs and finally online.

Selingo says that Amazon plans to spend more than $700 million to train 100,000 employees for higher-skilled jobs over the next six years. What's missing? Any college or university to design or deliver that training.

I also think that this idea is not brand new. Companies have been designing their own training for many decades. When I started at the New Jersey Institute of Technology in 2000, my department was helping design and provide training courses to companies. But as the decade progressed, I noticed more companies were designing the training and we were simply the delivery method. And now, it's more likely that the company might design and deliver.

What might be different in the case of Amazon is that if it follows their past path in cloud computing this will have a different result. For the cloud, they built their own platform internally (Amazon Web Services - AWS), worked out the bugs and then licensed it to scale. Might they eventually do the same thing with their higher-skilled training?

The rate of change in the skills and training needed now is far beyond the rather slow course-creation process of higher education. Selingo says that the legacy undergraduate and graduate degree programs at traditional universities and even the certificates that came into vogue in the 21st century don't make it.

Why is that? Because they take too long, cover more than is needed, and cost too much. I helped develop corporate training and certificates, but the university always had an eye on trying to lure those learners back to the university for a degree. That's not a valid approach anymore.

Selingo concludes that colleges and universities need to shift their thinking from serving students to the needs of learners.

From The Warehouse To IT: Amazon Offering 100,000 Workers Tech Training (NPR)

The idea that college education is over after four years, or even eight or 12 is so — yesterday - but 60 Years of Higher Ed — Really?

A friend of mine recently retired and she told me that she wants to move "out of her comfort zone" and try new things. My first thought was that this was a good idea, but the more I thought about her plan, the less "good" it seemed.

After years of teaching and a few vacations in Italy, she decided she wants to live there for a year. She sold her house and her car, got rid of a lot of stuff, put the essentials into storage, and took off for Florence, Italy.

I realized that I had more fear about her trip than she had. It was too far out of my comfort zone.

The graphic below popped up on Pinterest and got me thinking about that confining comfort zone. 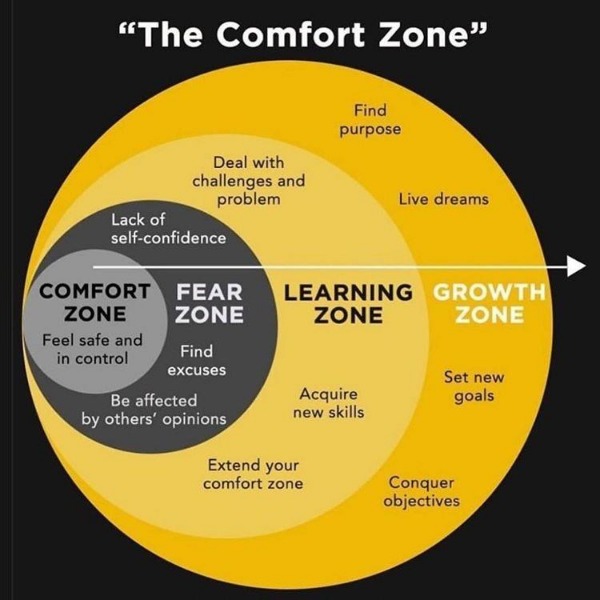 We all have a comfort zone in our jobs, in school and in life. As a teacher, I think I often intentionally tried to push students out of their comfort zone. Why? Looking at the graphic, I would say that I agree that the path to new learning and growth means pushing through your comfort zone.

There is an unsurprising plethora of sites with recommendations on how to break through your comfort zone. How many apply to education?

A friend who is not involved in education recently asked me, "Whatever happened to vocational educational?" He was thinking about when he was a kid in school back in the 1960s and there came a point before high school where he was presented with a choice. That choice was to go on to high school and prepare for college or go to a vocational school and prepare for a job. That choice is not so evident today in America.

Vocational education in the United States varies from state to state, but vocational schools (AKA trade schools) are both seen as an alternative high school experience and as post-secondary schools. In both cases, they teach the skills necessary to help students acquire jobs in specific industries. Both types of schools still exist.

The breadth of offerings has certainly increased since my friend's options almost 60 years ago, but some industries still are options, such as cooking, business courses, drafting, construction, auto repair, and some healthcare careers.

If we are talking about the postsecondary vocational training, much of that training is now provided by proprietary (privately-owned) career schools.

About 30 percent of all credentials in career training is provided by two-year community colleges.

We should also consider military technical training or government-operated adult education centers as part of this area. 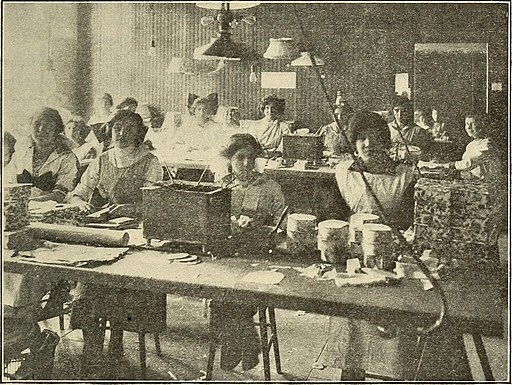 In the U.S., vocational education really moved forward in the early 1900s with an effort to introduce German-style industrial education. Educators were looking at the apprenticeship and continuation school models in Germany and were determining how they could be applied in an American context.

The industrial education system evolved more rapidly after World War I into what we call vocational education. On the timeline, the Smith-Hughes Act in 1917 was meant to reduce reliance on foreign trade schools, improve domestic wage-earning capacity, reduce unemployment, and protect national security.

The National Defense Education Act of 1958 was focused on improving education in science, mathematics, foreign languages and other areas with a particular focus on topics related to national defense.

Throughout the second half of the 20th century, vocation ed and "trade schools" acquired a stigma of being below the quality of college and just slightly better than high school. In fact, many vocational programs were in high schools and had become standalone vocational high schools during that time period.

This stigma even carried over to the 2-year colleges who were not aided by the use of the term "Junior College" that was once used before community and county colleges became the preferred terms.

Still, the "Stigma of Choosing Trade School Over College" persists, as that title from an article in The Atlantic notes.
"When college is held up as the one true path to success, parents—especially highly educated ones—might worry when their children opt for vocational school instead."

Vocational education in other countries https://en.wikipedia.org/wiki/Vocational_education#By_country