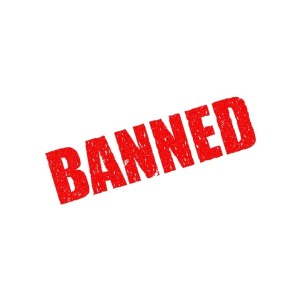 A few recent banned apps in the news should be of interest to educational institutions where students may very well be using them - and even some schools themselves may be using them. Here are two summaries from The Newsworthy podcast:

The U.S.. Navy banned TikTok from government-issued smartphones. They say the video-sharing app could be a cybersecurity threat. The Navy didn't expand on the reason, but we do know the U.S. has opened a national security review into TikTok’s China-based parent company ByteDance. TikTok hasn’t commented but has said before it uses U.S. rules.
Read more: Reuters

And then I read that ToTok (not to be confused with TikTok) has been banned from Google and Apple’s app stores. The messaging app appears to have millions of downloads, but the government of the United Arab Emirates allegedly uses it to track locations and conversations. If you have it, experts say you should uninstall it.
Read more: NYT, Wired

The Verge reported that in another move to gain more of our personal data, Google is teaming up with the nation’s second-largest health system, Ascension, in an effort it’s calling Project Nightingale.

Ascension will share the personal health data of tens of millions of patients with Google’s Cloud division in order to develop a search engine for medical records and other new artificial intelligence services for medical providers. That sounds helpful. But the announcement came right after Google announced it was buying the fitness tracker company Fitbit.

We could assume that Google is interested in selling this kind of hardware, but access to Fitbit user's personal data could be an even bigger and more profitable asset. (Fitbit data has already been used in some serious but not health manners - such as police investigations. )

Google is certainly not alone in wanting to gain this type of personal wellness data and do health care-tech collaborations. Apple would like to see its watch (similar to but more powerful than most fitness trackers) function as a medical-monitoring device. Its health data-sharing capabilities through Apple HealthKit are being enhanced.

All these companies will point out that the data they obtain is anonymized, but there are many examples of anonymized data being reversed so that it is far less anonymous. Are laws and policies ready for all this?

If you wanted to build a surveillance state, what would you do?

...you would have wiretap in your home listen to your conversations. You'd have cameras on every door seeing who is coming in and have a  a network of neighbors spying on you... facial recognition capabilities... a system knowing what you read and watch and buy. When you think about it, that's what Amazon offers you. Alexa in our homes is listening. Rings on our door watch and the neighbors' apps are telling on each other. They know what you read through Kindle and what you buy through Amazon and they're pretty good about predictive analytics, so in some ways Amazon is building a very effective surveillance state that we would be offended if the government tried to mandate, but somehow as consumers we seem okay with giving up this information to a private company.

- Andrew Ferguson, author of The Rise of Big Data Policing: Surveillance, Race, and the Future of Law Enforcement  in an interview from an interview on Marketplace Tech

I saw an interesting article about teen hackers who have to convince their parents that what they're doing is good rather than evil.

These high-school students are forming hack clubs to solve problems through coding in their schools. In this context, we can define hacking as coding, creating sites and apps, as in hackathons.  The hack clubs are generally student-led after school activities.

The term "white hat" refers to an ethical computer hacker. This computer security expert specializes in penetration testing and in other testing methodologies to ensure the security of an organization's information systems. They hack for good. The term "ethical hacking" is a broader term that means more than just penetration testing.

Following the cowboy movie iconography, the "black hat" is a malicious hacker. I have also seen the blended gray hat hacker described as one who hacks with good intentions but without permission.

I suppose the question that parents of a hacker - and educators and the authorities - might have is whether a young person starting as a white hat might become gray and be drawn to the dark side of black hat hacking.