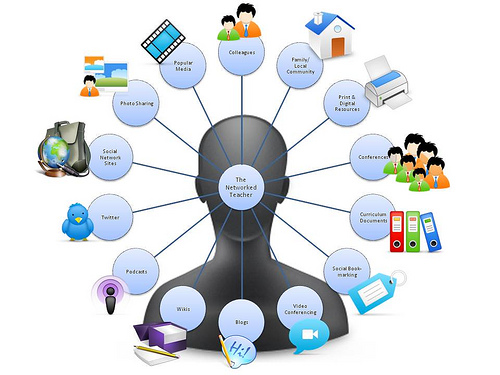 I am a bit surprised that so many educators still view social media (like Twitter and LinkedIn) and blogging as technocentric or even narcissistic endeavors. It points to the criticism I often hear that education is a field that is slow to change and resistant to change. I'm not sure how true that is - the speed with which MOOCs have become part of the mix in higher ed has been rather fast - but I would agree that there is still resistance to new technologies. For example, online learning, even after about twenty years of it being a part of higher education, is still controversial at some schools.

Personal Learning Networks (PLN) are informal learning networks that consists of the people a learner interacts with and derives knowledge from in a personal environment. It is all about the connection you make to others with similar interests and social networks have become the way that most often occurs. When I add people to my list of education and technology people in Twitter, it is because I have the idea that some type of learning will occur because of that connection.

The research on this fairly new approach to learning outside of school is generally labeled "connectivism" and much of was developed by George Siemens and Stephen Downes. The idea is that learners create connections and develop a network that contributes to their own professional development and knowledge. You don't have to know these people personally or ever meet them in person. Remember in the early days of Facebook how people scoffed at the idea that someone had 1000 "friends"?  Not as many jokes these days.

In  The New Learning Revolution by Gordon Dryden and Jeannette Vos, the authors say "For the first time in history, we know now how to store virtually all humanity's most important information and make it available, almost instantly, in almost any form, to almost anyone on earth. We also know how to do that in great new ways so that people can interact with it and learn from it."

Before I had heard of PLN, I was reading about PLE - Personal Learning Environments. In 2010, a PLE was defined in Emerging Technologies in Distance Education

as a "manifestation of a learner’s informal learning processes via the Web."

How does an educator start their own PLE or PLN? It's not that difficult. Get the basic social media accounts: Twitter, LinkedIn and even Facebook are easy places to begin. The important work on your part will be finding the people who have similar interests to your own. When I find someone I want to follow, I add them to one of my own interest lists. In twitter, one of my lists is for education + technology. You can look at that list and see if anyone catches your interest. I always check the public lists of people who I follow to see who they are following.

Of course, most of the really good content goes beyond a tweet of 140 characters. Most good tweets contain a link, and many of those links are to articles or blog posts. Reading blogs and eventually writing your own blog is also part of creating a PLN.

Finding interesting bloggers is much like find people to follow in any social network. What's great about blogs (as opposed to trying to follow writers or journalists is that you can subscribe to their posts using a reader application like Feedly. Their posts all show up in brief on one page and you can select which ones you want to read. Feedly also allows you to post your own links to good articles to your own Twitter, Facebook and other accounts or email it to someone in your PLN.

Soon, you will become someone that others add to their own PLN.

Writing your own blog means that you are at a point where you want to move out of Social Web 1.0 to Social Web 2.0 where you create your own content to share rather than just passing on other people's content.  You can use Blogger (from Google) or WordPress to create a good blog platform. Both are free and pretty easy to use. You might want to start with the "micro-blogging" tool, Tumblr, that is popular for short posts and for reposting others content easily.

I feel that PLNs are part of professional development these days. (You could make the P in PLN stand for "professional" if that makes it seem more accurate.)  That's true beyond education, as some businesses are already creating their own e-learning content and PLEs for their employees. The European Union Lifelong Learning Programmehas recognized the potential for PLNs by funding the aPLaNet project (Autonomous Personal Learning Networks for Language Teachers).