Event-based Internet is going to be something you will hear more about this year. Though I had heard the term used, the first real application of it that I experienced was a game. But don't think this is all about fun and games. Look online and you will find examples of event-based Internet biosurveillance and event-based Internet robot teleoperation systems and other very sophisticated uses, especially connected to the Internet of Things (IoT). 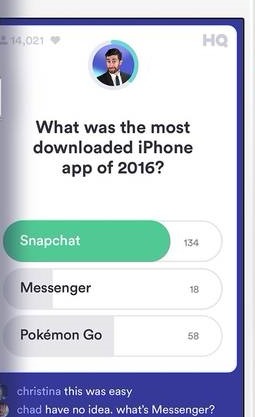 What did more than a million people do this past Sunday night at 9pm ET? They tuned in on their mobile devices to HQ Trivia, a game show, on their phones.

For a few generations that have become used to time-shifting their viewing, this real-time game is a switch.

The HQ app has had early issues in scaling to the big numbers with game delays, video lag and times when the game just had to be rebooted. But it already has at least one imitator called "The Q" which looks almost identical in design, and imitation is supposed to be a form of flattery.

This 12-question trivia quiz has money prizes. Usually, the prize is $2000, but sometimes it jumps to $10 or $20K. But since there are multiple survivors of the 12 questions that win, the prizes are often less than $25 each.

Still, I see the show's potential (Is it actually a "show?") Business model? Sponsors, commercial breaks, sponsors and product placement in the questions, answers and banter in-between questions.

The bigger trend here is that this is a return to TV "appointment viewing."  Advertisers like that and it only really occurs these days with sports, some news and award shows. (HQ pulled in its first audience of more than a million Sunday during the Golden Globe Awards, so...)

And is there some education connection in all this?  Event-based Internet, like its TV equivalent, is engaging. Could it bring back "The Disconnected" learner?

I found a NASA report on "Lessons Learned from Real-Time, Event-Based Internet Science Communications."  This report is focused on sharing science activities in real-time in order to involve and engage students and the public about science.

Event-based distributed systems are being used in areas such as enterprise management, information dissemination, finance,
environmental monitoring and geo-spatial systems.

Education has been "event-based" for hundreds of years. But learners have been time-shifting learning via distance education and especially via online learning for only a few decades. Event-based learning sounds a bit like hybrid or blended learning. But one difference is that learners are probably not going to tune in and be engaged with just a live lecture. Will it take a real event and maybe even gamification to get live learning?

In all my years teaching online, I have never been able to have all of a course's student attend a "live" session either because of time zone differences, work schedules or perhaps content that just wasn't compelling enough.