Does it disturb you to be thought of as a "data point" or "test subject"? A data point is a discrete unit of information, a single fact usually derived from a measurement or research. A person as a data point can be represented numerically or graphically. That sounds pretty cold.
An article on chronicle.com about Western Governors University (WGU), a nonprofit, online-only institution that enrolls 80,000 students worldwide, talks about how it has enlarged its institutional-research office the past few years and how students are very much data points. Of course, students, as well as employees and customers offer a valuable source of data for researchers.
In an educational setting, this data could be used to improve student outcomes and to make assessments that can lead to improvement in learning design and delivery..
One of the often stated benefits of MOOCs has been the opportunity to use these very large courses to obtain data about how students learn online. Critics of this approach say that learning online in a class of 25 versus a class of several thousand are not comparable experiences. And are there valid comparisons to how students learn online to learning in a face-to-face class? That has been argued for several decades.
WGU is also a competency-based institution. Standardized measurements and goals are how their courses are designed. If not a good thing for a student's education, it certainly is an approach that is great for researchers who can hold certain variables constant while testing tools and interventions to see how they influence students.
No one likes to be thought of as just a number. It reminds me of sci-fi novels and media about the future like 1984 and Brave New World (or the cult favorite TV series, The Prisoner, illustration at top). But we are all very much considered as data points by advertisers and in many modern technologies, social networks and institutions. 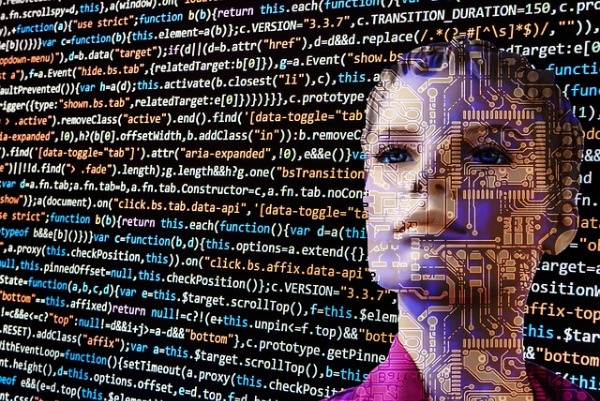 What is the difference between artificial intelligence (AI) and machine learning (ML)? AI is an umbrella term to describe a branch of computer science that deals with the simulation of intelligent (human) behavior. Machine learning is a subset and currently the most common type of AI. We encounter it, consciously or unconsciously, in our every the average person will encounter.

Amber MacArthur posted in one of her recent newsletters some examples of AI & ML. Any phone "assistant" (such as Apple's iPhone assistant Siri, works because it relies on huge amounts of data, but its development is based on machine-learning technology. These machines "learn" over time based on our interactions with them. This happens without being programmed to say or do new things.

It takes more than data for people and machines to learn. It requires being able to recognize patterns in that data and learning from them, being able to draw inferences or make predictions without being explicitly programmed to do so. It needs to do critical thinking.

Another AI example noted by MacArthur is SnapTravel. It is a chatbot that uses machine learning to run its "half-bot, half-human" service with its users. It uses SMS or Facebook via Messenger to work with a "bot" agent to book your hotel reservation.

During the 1960s and 70s, the technology alarm was that computers will be taking our jobs. It turned out that some jobs disappeared, but many more were created. The new technology alarm is that AI will take away jobs. And that will happen if people are "disinclined to technical skills" because they may not be able to earn a good living in a market economy. One prediction is that "as AI improves and gets cheaper, many of the jobs left for humans will be those so badly paid they are not worth replacing with a machine." Ouch.

I did a presentation last month titled "Gaming STEM in Humanities Courses" at the NJEDge Faculty Best Practices Showcase.

I talked about using serious games, primarily the Web Adventures series developed by Rice University, as a way to increase students’ science knowledge and to inspire science-related careers. I was interested in “gaming” these STEM programs for teaching humanities courses.

I used the Web Adventures in several courses, but I particularly liked using it in an undergraduate critical thinking course. Take a look at the slides from the presentation.

I had only posted about social learning here recently, but a few days after that post someone sent me a link to an article about "Four Myths of Social Learning."

Myth 1: Social Learning is a New Fad - Learning and social are a very natural ways we want to learn. A Google search on "social learning" will get you more than 44 million results.

Myth 4: Social Learning is About Forcing Your People to Use Your New Social Learning Platform - As Helen Blunden writes in that article, "Instead of focusing on your social learning system, consider how your people are searching, finding and sharing information currently and helping them to improve this.