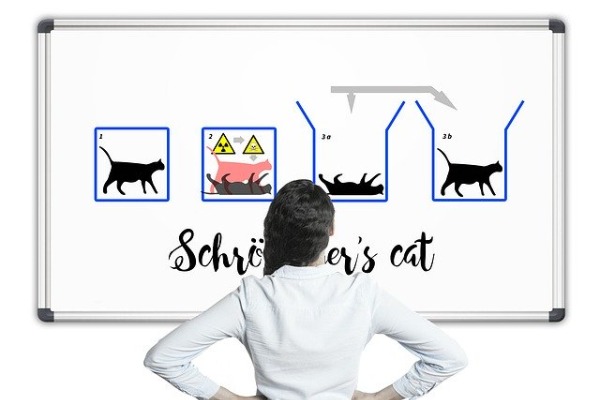 A cat sits in a box along with some kind of poison that will be released based on the radioactive decay of a subatomic particle. Because these tiny particles are capable of being in multiple states at once (decaying or not decaying at the same time, that means the poison could simultaneously be released and not released. By extension, the cat could be dead and not dead.

When I first heard back in high school I thought of some Zen koans or stories that are equally paradoxical and maddening.  If a tree falls in the woods and no one is around to hear it, does it make a sound?

A clearer analogy for me was when I heard it explained as being like a spinning coin. While it is spinning, it can be heads or tails. We don't know what it is until it falls and stops spinning. No cats are injured in this version.

I thought about Mr. Schrodinger's cat and about that spinning coin when I was reading something recently about quantum computing. Schrödinger's cat is often used to illustrate the concept of superposition -- the ability for two opposite states to exist simultaneously -- and unpredictability in quantum physics.

Quantum computing is about harnessing and exploiting quantum mechanics in order to process information. The computers we are used to using “bits” of zero or one. If we had a quantum computer, there would be quantum bits (qubits). The freaky Schrodinger's cat part of quantum computers is that they would perform calculations based on the probability of an object's state before it is measured. Not just 1s or 0s. That means they would have the potential to process exponentially more data compared to traditional computers.

It has been 85 years but people are still messing around with the whole cat thing. Some physicists have given Schrödinger’s cat a second box to play in. This cat lives or dies in two boxes at once in order to consider quantum entanglement. Entanglement means that observation can change the state of a distant object instantaneously - something that Einstein considered impossible and referred to as “spooky action at a distance.”

Are we even close to creating a quantum computer? It depends on who you read.

Here's a leap beyond cats and coins that came to me because I was surfing through channels on the television and saw that Christopher Nolan's film Inception.

A character in the film returns home after a long time in the dream world and we are told that a little top that he sets into motion will keep spinning forever if he is still in the dream world. If it stops and falls over, that means he is back in reality. It's like the old pinch yourself to see if you're dreaming.

But the film has a frustrating final shot because it ends before we know what happens to the top. It wobbles but then the film ends. That ending was infuriating to most viewers. It was like the finale of The Sopranos. What happened?

Nolan once spoke at a Princeton University graduation ceremony and said that "The way the end of that film worked, Leonardo DiCaprio’s character Cobb — he was off with his kids, he was in his own subjective reality. He didn’t really care anymore, and that makes a statement: perhaps all levels of reality are valid."

Nolan's point to the graduates? Don't chase dreams; chase realities because, unfortunately, "over time, we started to view reality as the poor cousin to our dreams".

Can you prove that you're not dreaming right now?

That "pinch yourself" thing isn't adequate proof. What if this is a dream that you're stuck in?  Does it matter? If it is, this dream is your reality.

This sounds like some philosophical skepticism - that school of thought that I once had to study in school and that also sent my mind running in circles. It argues that we can't really know that anything is real. Why? Some would say because you deny the possibility of knowledge. The side I fell on as a college student was that we couldn't make that judgment of "real" because there isn't enough evidence.

That's enough circles to run around in for today.

Even cats have been considering what Schrodinger proposed. (image via GIPHY)