In 2015, Columbia University’s Open Syllabus Project wanted to learn what books are being taught. Using data from over one million syllabi from university websites worldwide, they came up with a list of books that have been most frequently taught over the past decade. Since the, they have added another 5 million syllabi.

Would you be surprised that the top titles on the list did not change significantly? I am not surprised. Actually, I would not be surprised to discover that our reading lists haven't changed in the past 50 or, in some cases, maybe even 100 years.

This is not a list of just American colleges. "Classics" such as The Republic and the Communist Manifesto. There are not many titles on the list that I couldn't have found on my reading list as an undergrad almost 50 years ago. 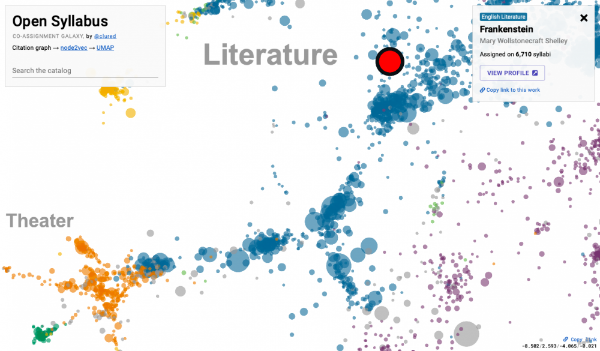 You can see interactive visualizations of the data at https://galaxy.opensyllabus.org/

The “traditional Western canon" dominates the top 100. Plato’s Republic is at #2 and The Communist Manifesto is at #3, and #5 is Frankenstein. Then, there comes Aristotle’s Ethics, Hobbes’s Leviathan, Machiavelli’s The Prince, Sophocles’ Oedipus, and Shakespeare’s Hamlet.” These titles have remained pretty stables over the years.

Who holds the top position? It is the slender writing guide Elements of Style.

The most-taught books tend to fall into either philosophy, literature, textbook, or guidebook. The entire list includes 165,000 texts, so there is variety. And nothing every book is "classic" since there are newer titles in areas like gender studies, media studies, digital culture, and environmental studies.

This is different from the list of the most influential academic books compiled a few years ago, although there are some shared titles. The Prince and The Republic are on this list too. It makes sense that books considered to be "influential" would make the syllabus list. But this list was made by academic booksellers, librarians, and publishers. On this list, the top spot went to Darwin's On the Origin of Species.

Should we interpret these results as meaning that faculty are stuck teaching the same things over and over? If so, why? Because they are "classics"? Because the faculty are a bit lazy about preparing new material? Because it is what is expected by their department or academia?  That data doesn't answer these questions.