A literal rhizome appears on plants. It is not a root, but more like a stem that sends out shoots and roots from its nodes. "Nodes" may make readers of this blog think of a network and that is one reason why the word was used to describe a kind of learning. As a gardener, I think of the plants (especially weeds and invasive species) that spread with vast networks of roots and will even shoot up new plants at a distance from the original. 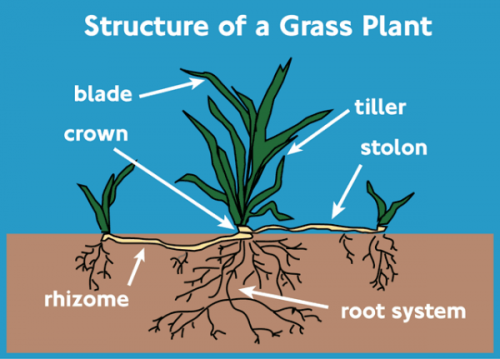 This method of spreading appealed to two French philosophers, Gilles Deleuze and Felix Guattari, in writing their book, A Thousand Plateaus. Rhizomatic learning is actually a variety of pedagogical practices that has more recently been identified as methodology for net-enabled education.

This theory of learning is not like the goal-directed and hierarchical approaches that has been the traditional approaches in classrooms. In the rhizomatic approach, learning is most effective when it allows participants to react to evolving circumstances. That means the task or goal is fluid and continually evolving.

That is a structure where the "community is the curriculum" and it turns teaching, learning and instructional design. Most educators and students are primed for pre-existing objectives. There is comfort in knowing where we are headed and then knowing that we have arrived there.

Dave Cormier's introduction/preface/prologue for an upcoming edited book on rhizomatic learning is online as a long post. Cormier avoids a hard definition as he finds that when we define "particularly in writing, we necessarily exclude some of the nuance of the meaning. We leave out the chance that the definition can get better. We leave out another’s perspective." But people want definitions.

It is no surprise that that Dave Cormier first came to worldwide educational attention as one of the early users and pioneering formulators of the Massive Open Online Course (MOOC). Those original MOOCs were often rhizomatic in structure in that the learning path, the goals and objectives of learners, and so the course it self, was not written in a stone syllabus.

Cormier found in his teaching that using new technologies his students' work "became more diverse and more individualized, and, at the same time, I had lost some control over the teaching process." That can either feel exciting or frightening to a teacher.

And yet, like most of us, Cormier's research reading indicated that "students were ‘most successful’ when they had a clear expectation of what success could look like." Having clear goals for each learning event did not match up with what he was seeing in his teaching.

Curriculum that is textbook-driven (as far too much of our courses are "designed") support a highly structured, linear approach to learning. Add to that structure assignments that come from the content and answers to those assignments that are clearly stated (perhaps in the Teacher’s Copy) and you have a very un-rhizomatic growth pattern. This is growth restricted by borders, walls, planters and possibly even prevented from moving outside the structure by educational "chemicals" designed to kill off stray rhizomes, roots and shoots.

It seems that what gave rise to the current rhizomatic learning growth spurt was the Internet. Cormier's piece goes back much further.

First, he looks to Marcus Tullius Cicero and Gaius Julius Caesar. Then he jumps to the year 1270 and the University of Toulouse, and then to Switzerland in 1800. On that last stop in his history, Johann Heinrich Pestalozzi decides that in order to teach the entire country to read (this is before a public school programs and before teacher education programs) he needs standardization. His method is the textbook. It is a way to make 10000 identical copies of content that all will use.

Pestalozzi was using the new technology of his time - the printing press. It allowed him to scale the learning process to more people. But his efforts and ones to follow not only sought to standardize the content, but also the process and the path to learning.

Cormier argues that following that path may have led us to believe that simply following the path means that learning is occurring. He also believes now that under the technology, rhizomatic learning was always happening. As a simple example, he points at the citations in an academic article that thread back rhizomatically to sources.

The Wikipedia entry of rhizomatic learning notes that educational researcher Terry Anderson has criticized the way in which advocates of rhizomatic learning seem to attack the idea of formal education as a whole. And one of Cormier's fellow MOOC pioneers, George Siemens, has questioned the usefulness of the rhizomatic metaphor: "I don’t see rhizomes as possessing a similar capacity (to networks) to generate insight into learning, innovation, and complexity... Rhizomes then, are effective for describing the structure and form of knowledge and learning...[h]owever, beyond the value of describing the form of curriculum as decentralized, adaptive, and organic, I’m unsure what rhizomes contribute to knowledge and learning."

If this approach to learning is truly rhizomatic, it should be difficult to stop from spreading.