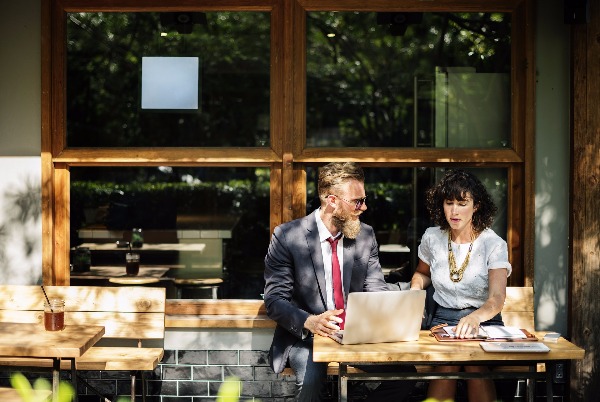 I was quite charmed last year when I made my first visit to Prague in the Czech Republic. I had in my mind a Romanticized version of the city and its famed café culture. In my imagination, it was people sipping coffee on sidewalk table and talking about art and literature. When my wife and I went for coffee and dessert at the Café Imperial, it was certainly much grander than anything I had imagined.

We did find those little cafés too, so I was able to embrace my Romantic version of the city. There is also the well-documented role of  the coffeehouse in the Age of Enlightenment. These informal gatherings of people played an important role in innovation in politics, science, literature and religion.

Next year, I hope to visit the Café de Flore which is one of the oldest coffeehouses in Paris. Located at the corner of Boulevard Saint-Germain and Rue Saint-Benoît, it is known for its history of serving intellectual clientele. At one time, those tables overheard conversations from existentialist philosopher Jean-Paul Sartre,  writer Albert Camus and artist Pablo Picasso.

In science, breakthroughs seem to rarely come from just one person working alone. Innovation and collaboration usually sit at the table together. We are currently in a time when, at least in American politics, collaboration seems nonexistent.

This notion is what caught my attention in an interview I heard with Steven Johnson who wrote Where Good Ideas Come From.

He writes about how “stacked platforms” of ideas that allow other people to build on them.  This way of ideas coming together from pieces borrowed from another field or another person and remixing feels very much like what has arisen in our digital age.

One example he gives is the 1981 record My Life in the Bush of Ghosts by Brian Eno and David Byrne. It is an innovative album for that time in its use of samples well before the practice became mainstream. Eno was inspired by the varied voices and music and advertising on New York AM radio which was so different from the straightforward BBC radio he grew up with in England. He thought about repurposing all that talk into music.

We call that “decontextualizing” now – in this case a sound or words taken out of context and put in a new place. But this borrowing and remixing also occurs with ideas in culture, science and technology.

Unfortunately, ideas are not always free to connect with each other. Things like copyright and intellectual property law get in the way. We often silo innovators in proprietary labs or departments and discourage the exchange of ideas.

I didn’t know that Ben Franklin had a Club of Honest Whigs that would meet at the London Coffeehouse, when he was in England and they would hang out and exchange ideas.

Johnson describes these as “liquid networks” – not so much for the coffee, but for the fluidity in the conversation. These informal networks work because they are made up of different kinds of people from different backgrounds and experiences. Diversity is not just necessary as a biological concept but as an intellectual one.

The Internet was built on ideas stacked on top of ideas. A whole lot of code and ideas are underneath this post. At its best, when I write online I am connecting, if only virtually, with other writers, artists and thinkers, and connecting literally through hyperlinks to those ideas.

I know there are “Internet cafés,” but what about Internet as a café?

Submitted comments will be subject to moderation before being displayed.