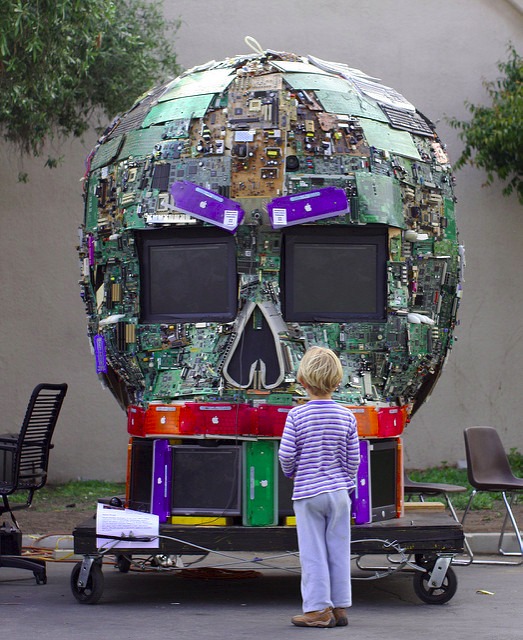 AI - “artificial intelligence” - was introduced at a science conference at Dartmouth University in 1956. Back then it was a theory, but in the past few decade it has become something beyond theoretical. been less theory and more in practice than decades before.

The role of AI in education is still more theory than practice.

A goal in AI is to get machines to learn. I hesitate to say "think" but that is certainly a goal too. I am reading The Innovators: How a Group of Hackers, Geniuses, and Geeks Created the Digital Revolution currently and in that history there is a lot of discussion of the people trying to get machines to do more than just compute (calculate) but to learn from its experiences without requiring a human to program those changes. The classic example is the chess playing computer that gets better every time it wins or loses. Is that "learning?"

But has it had an impact on how you teach or how your students learn?

It may have been a mistake in the early days of AI and computers that we viewed the machine as being like the human brain. It is - and it isn't.

But neuroscientists are now finding that they can also discover more about human learning as a result of machine learning. An article on opencolleges.edu.au points to several interesting insights from the machine and human learning research that may play a role in AI in education.

One thing that became clear is that physical environment is something humans learn easier than machines. After a child has started walking or opened a few doors or drawers or climbed a few stairs, she learns how to do it. Show her a different door, drawer, or a spiral staircase and it doesn't make much of a difference. A robot equipped with some AI will have a much steeper learning curve to learn these simple things. It also has a poor sense of its "body." Just watch any videos online of humanoid robots trying to do those things and you'll see how difficult it is for a machine.

Then again, it takes a lot longer for humans to learn how to drive a car on a highway safely. And even when it is learned, our attention, or lack thereof, is a huge problem. AI in vehicles is learning how to drive fairly rapidly, and its attention is superior to human attention. Currently, it is still a fall back human error in mist cases, but that will certainly change in a decade or two. I learned to parallel park a car many years ago and I am still lousy at doing it. A car can do it better than me.

Although computers can do tasks they are programmed to do without any learning curve, for AI to work they need to learn by doing - much like humans. The article points out that AI systems that traced letters with robotic arms had an easier time recognizing diverse styles of handwriting and letters than visual-only systems.

AI means a machine gets better at a task the more it does it, and it can also apply that learning to similar but not identical situations. You can program a computer to play notes and play a series of notes as a song, but getting it to compose real music requires AI.

Humans also learn from shared experiences. A lot of the learning in a classroom comes from interactions between the teacher and students and student to student. This makes me feel pretty confident in the continued need for teachers in the learning process.

One day, I am sure that machines will communicate with each other and learn from each other. This may be part of the reason that some tech and learning luminaries like Elon Musk have fears about AI.

I would prefer my smart or autonomous vehicle to "talk" to other vehicles on the roads nearby and share information on traffic, obstructions and vehicles nearby with those quirky human drivers only.

AI built into learning systems, such as an online course, could guide the learning path and even anticipate problems and offer corrections to avoid them. Is that an AI "teacher" or the often-promoted "guide on the side?"

This year on the TV show Humans, one of the human couples goes for marriage counseling with a "synth" (robot). She may be a forerunner of a synth teacher.

The counselor (back to us) can read the husband's body language and knows he does not like talking to a synth marriage counselor.