To some in academia, Massive Open Online Courses (MOOC) are a paradigm shift in online education, while others perceive them as a threat to traditional styles of pedagogy.

For that latter take on them, the time-honored model of the university lecture is seen as being a potential casualty of the rise of MOOCs.

My wife, Lynnette, and I contributed a chapter to the newly-published book, Macro-Level Learning through Massive Open Online Courses (MOOCs): Strategies and Predictions for the Future

.  The text covers the phenomenon of MOOCs as a design manual for the course designer with a collection of chapters that deal with all facets of the MOOC debate. Industry training developers, corporate trainers, educators, post graduate students, and others will benefit from the information provided in this book.

Our chapter, "MOOCs: Evolution and Revolution," looks at the place of the MOOC in the evolution of online learning. A few years ago, the MOOC hit education like an asteroid and the dust has yet to settle, but as in all debates, the MOOC is being embraced and feared in very much the same way that other technologies simultaneously enhanced and threatened roles in corporations, small businesses and schools. 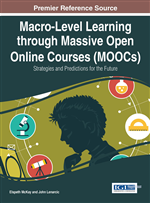 So, evolution or revolution?

While they offer opportunities for higher education, they also threaten the tuition, credit and degree programs that have been at the center of universities for centuries.

Education is certainly in the forefront of discussions around the world. At the 22-25 January, 2014 World Economic Conference (WEF), education was part of several Open Forum Panel discussions. This invitation-only annual meeting held by the WEF in the eastern Alps region of Davos-Klosters, Switzerland, focuses on global concerns. In the video streams of Open Forum Davos 2014, there was a panel called ‘Higher Education-Investment or Waste?’ moderated by David Callaway, Editor-in-Chief of USA Today. One panel participant was Zach Sims, who was introduced as a 23-year-old entrepreneur who dropped out of Columbia University in the City of New York to be the CEO and co-founder of a company called Codecademy. This company offers online courses for people who want or need to learn computer coding for their career (www.codecademy.com). The panel questioned whether traditional higher education is worth the cost and debated the alternatives. Sims argued that “the universities are facing competition from the free market from companies like ours [Codecademy and Coursera] and they [the universities] will become better and will provide alternatives to people”.

The panel was optimistic that change would come to higher education, both in cost and structure; the entire panel agreed that tertiary education in some new form will remain pertinent in the global market. After a period for audience questions and participation, the majority of the audience, during an informal poll, voted that MOOCs are a revolution.

Most technological change involves massive disruption whereas economic ‘bubbles’, like the trillion-dollar student loan bubble in the U.S., tend to burst, not slowly deflate. Initially, the disruption of the MOOC may have appeared to be a rapid revolution just a few years ago, but it seems more likely to become a gradual evolution over the course of the next decade.

With that behind us, we are in a period that will determine the true value and place for MOOCs. This evolutionary stage in the development of online learning may have a greater revolutionary impact on the way it changes how we educate and validate learning inside and outside educational institutions.

What are the new rules that will accompany these possible new models in education?

Public universities and for-profit institutions have been offering fully online degree programs for several decades. If one of the goals of some organizations offering MOOCs is to provide degrees either through partnerships with established universities or by the universities themselves, then MOOCs are another way of continuing that work. However, if the MOOC becomes an actual ‘alternative’ to the courses, degree programs and the traditional university itself, then we have a revolution.

Part 2: the role of the MOOC and traditional learning