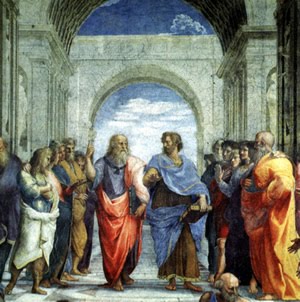 There are always books being published about reimagining education. There are plenty of articles about educational disruptors. I have been writing about School/University 2.0 for a few years. Some of us are experimenting with MOOC's, badges, competency-based degrees, open education and other ideas.

Last fall, Time magazine had a "Reinventing College" headline that said "College Is Dead. Long Live College!" Since 2012 was the "Year of the MOOC" (to some) Time wondered if they would "pop the tuition bubble" and the president of Northeastern University wondered if "we're witnessing the end of higher education as we know it."  Everyone seems to want to know what will disrupt education next and cane we prepare for it now?

An article in The Chronicle asks a different version of this topic: "For Whom Is College Being Reinvented?" Are these disruptors only disrupting education for some people? If a revolution is coming in higher education, who will be overthrown?

Khan Academy's founder, Salman Khan, reimagines education from the elementary schools up through college and sees those teachers in the early years less as the source of knowledge in the classroom and more of the mentor. His college is more of a place where students are working on internships and mentored projects and are not in classrooms.

"Those who can afford a degree from an elite institution are still in an enviable position," wrote Megan McArdle in a Newsweek article, "Is College a Lousy Investment?"  But what about the rest of the high school grads? She suggests apprenticeships and on-the-job training as more realistic and more affordable options.

Is reinvention and disruption creating (or, perhaps more accurately, returning us to) a two-tiered system of a traditional campus-based education for the haves and some other open/MOOC/online/creditless system for the have-nots?

I don't think Princeton University needs to worry much about having no one apply for admission - though they will get a smaller applicant pool just like the other schools. It's the smaller colleges that may take the hit.

Perhaps some of those smaller schools and the two-year colleges will reimagine themselves as the place for that alternative education.

MOOCs, badges, certifications and other disruptors will not save higher education. They may change it in some positive ways. There is hope that they can push us to modify the way we teach and the way we assess mastery, foster interdisciplinary work and more real-world applicability in courses, and make learning more efficient. They might also return us to the thinking from a much earlier age when no one thought that "there's a college for everyone."