The Philadelphia Experiment is an urban myth about a secret experiment conducted by the U.S. Navy at the Philadelphia Naval Yards at Philadelphia, Pennsylvania, on or before October 28, 1943, which went horribly awry.

It is also called "Project Rainbow". Every member of the ship's crew denies that any form of this event ever occurred. All scientists and naval historians note the entire affair is an urban legend.

The experiment was allegedly conducted by one Dr. Franklin Geno (or Rinehart) as a military application of Albert Einstein's unified field theory, or "generalized theory of gravitation". The theory, briefly, postulates the interrelatedness of the forces that comprise electromagnetic radiation and gravity. Through a special application of the theory, it was thought to be possible, with specialized equipment and enough energy, to bend light around an object, rendering it essentially invisible. The Navy considered this application to be of obvious value in wartime (as the United States was engaged in World War II at the time) and approved and sponsored the experiment. A Navy destroyer escort, USS Eldridge (DE-173), was fitted with the required generator equipment at the Naval Yards in Philadelphia.

Al Bielek's own statement, all of his memories were erased and his mind was reprogrammed with totally different memories. This reprogramming might have been done with the technique of "Psychic Driving". After being brainwashed, Al Bielek's personal information and memories must have been altered, so that he mistakenly believe he was related to a collaborator in the plan to use him to mislead others that there was a time machine. However, it was purely caused by the virtual blank machine (which removed all of his original memories) and psychics driving (to input new memories into his mind).

He went to college in Newark and ended up in engineering?  Sounds like NJIT to me!

More on the experiment at http://en.wikipedia.org/wiki/Philadelphia_experiment 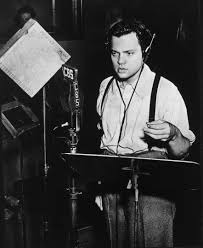 And then we have a second hoax that gained a lot of attention - Orson Welles' Mercury Theater radio broadcast, based on The War of the Worlds. It caused a panic in the Eastern United States on October 30, 1938. In Newark, New Jersey, all the occupants of a block of flats left their homes with wet towels round their heads and in Harlem a congregation fell to its knees. Welles, who first considered the show silly, was shaken by the panic he had unleashed and promised that he would never do anything like it again.

The War of the Worlds novel (1898) by H.G. Wells (no relation but a nice serendipity) is about an invasion by Martians. The story appeared at a time when Schiaparell's discovery of Martian "canals" and Percival Lowell's book Mars (1895) arose speculations that there could be life on the Red Planet.

The narrator is an unnamed "philosophical writer" who tells about events that happened six years earlier. Martian cylinders land on earth outside London and the invaders, who have a "roundish bulk with tentacles," start to vaporize humans. The Martians build walking tripods which ruin towns. Panic spreads, London is evacuated. Martians release poisonous black smoke. However, the aliens are defeated "by the humblest things that God, in his wisdom, has put on this earth" - bacteria.

Welles' adaptation of Welles' novel is quite loose. London becomes suburban New Jersey, but the a high schooler's plot summary of the novel would suffice for an outline of the radio play. Orson Welles' focus was on using radio as the medium of news and the way news can be distorted and misunderstood. He sure proved his point.

Although Wells' novels were highly entertaining, he also tried to arouse debate about the future of the mankind.

"Those who have not read The War of the Worlds may be surprised to find that, like much of Wells' writing, it is full of poetry and contains passages that catch the throat. Wells tried to pretend that he was not an artist and stated that "there will come a time for every work of art when it will have served its purpose and be bereft of its last rag of significance." This has not yet happened for the best of Wells' science fiction, though it has done so for all but a few of his realistic and political novels." (Arthur C. Clarke in Greetings, Carbon-Based Bipeds!, 1999) http://wells.thefreelibrary.com/

One modern study of the event is Broadcast Hysteria: Orson Welles's War of the Worlds and the Art of Fake News which  retells the story of Welles's play and its impact and also looks at whether or not the "wave of mass hysteria," (according to The New York Times) was really mass hysteria.

Today we expect live coverage of any natural or manmade disaster. And we also are both aware of and unknowing victims of what is called"fake news."  Did Welles start that?  Hmmmm...